Su Dennett and David Holmgren welcome us at Melliodoria, in Hepburn, Victoria for a day visit. Holmgren being one of the two founders of Permaculture, we of course expect him to start it up with this topic. Far from it – or is it really ? - he starts with presenting the house and its design, zone 0 of the permaculture zoning principles in effect, as if to remind us that permaculture is NOT solely a gardening technique, it isn't even a gardening technique at all really, but both an ethical system and a set of design principles that can come in a variety into rules and finally guide the creation of techniques.

Around the time, David Holmgren and Bill Mollison coined the « permaculture » term onto their system design life concept, David also was building passive solar – bushfire resistant houses. The idea was to use as much natural and sustainably sourced material and to design them so that – when properly used – they do not require heating – or a minimum of it and that it is carbon-neutral when it does – and no cooling. He quickly found out that this type of house goes together with a lot of human behaviours that need to be implemented in order to work. In a way, not only physically, the zoning in permaculture stems naturally from your own self, your own behaviour, extending to your house itself and out into the veggie garden outside and further and beyond in this sequence.

In 1985, this 2 ¼ acres land there was covered in black berries, with a few trees, including one giant pear tree. It was quite cheap at the time and it had a water stream with the possibility to build a dam meaning enough water and bush fire resistance. There is two type of soils there, clay based and volcanic.

Bush-fire resistance needs to be designed so that one able-bodied person can protect the house from bush fire. David explains that this type of design is 400 to 500% more efficient than any design in itself.

The main attribute of the passive solar design is the orientation of the house. The Northern side receives the winter sun and should be design to get in as much sunlight as possible whereas the Southern side should be as « closed » as possible to avoid the summer heat.

The house is earth-based with sustainably harvested wood. Larch as an example is a very good good wood for timber, even untreated. Wood can be harvested after storms for example from the fallen trees – it is the case of the cypress and blackwood timber that was used in Melliodora.

The house was built with load-bearing mud-bricks walls. This is possible in a drier climate as you can build it up progressively and then install the roof. In wetter climate, it is better to have a timber frame, put a roof and then start on the mud-bricks walls which are then sheltered from rain. Mud bricks were created using the soil that was taken out to level the terrain where the house was built. It is not a very good insulator but has a good thermal mass allowing catching-and-release of excess heat / cold.

The floor and internal walls are all mud bricks. On the North side, the mud-brick wall is not external as there is a veranda and a green house long the whole front. On the South side, the mud-bricks walls are in contact with the outside but only the bathroom and bedrooms are behind those, and as such are not heated. On the West side, a garage creates a large shell and on the east side, the top of the house is level with the slope so that the east wall is in contact with the soil in fact and not the air.

The windows are double glazing, with an 18mm gap which is the optimum for insulation efficiency. As part of the bushfire-resistant design, the higher windows are resistant for flying debris, which is the main cause of houses burning down during bushfires.

The roof is made of corrugated iron which is light weight, resistant and durable. There is vent on the roof to allow the heated air to come up and create a cooling effect airflow.

David Holmgren says it is a « passive-solar, active human » design in fact. Humans need to take care to put the blinds when required, to open and close the windows as is fit, otherwise the house can become an oven or a fridge if not taken care of properly as the thermal inertia is huge and thus the temperature regulation once unbalanced can take a long while to recover. In fact in general, the house remains closed and it is opened only when Text = Tint.

For the green house, the louvers and roof vent are opened during heat times. The windows of the green house are put together with the structure using engineering/structural grade silicon mastic which has proven quite resistant to both temperature variations and humidity. Louvers used around the green house and the house need to be of good quality and shut properly.

The house stove and water heating and overall heating when needed is wood-fire based. Overall about 7 tons of wood a year is used. It is harvested in a forest area which they own in a sustainable way and also from the land around the house (tree cuttings, storm fallen branches...). David Holmgren explains that a forest managed sustainably could yield about 5T per hectare per year of wood and 1T per hectare per year of logs. It is essential that the stove be efficient and of good quality to produce both enough heat and use less wood. The charcoal remaining can be used as biochar in the garden and the ash can be used in the pasture as the compost used in the garden already provides enough potassium in general.

When designing, David mentions, it is essential to get interested in the source of the material and its implications both political and ecological. For building a house, the timber chosen should have very low shrinkage in order to ensure proper connection with the mortar and paint. The wood should also be selected carefully according to pest resistance and damp issues, radiate pine is especially prone to anobium borers. To make the ceiling and walls lighter, they used a lime white wash on the wood rather than varnish.

In the beginnings, the house was connected to the water network but its taste was very chlorinated. Now they have installed rainwater tanks. They use an outside compost bucket toilet. The oil from the cooking is whiped with paper rather than detergent and water to reduce the water pollution. The water is then going through a grey water system. The electric consumption is about 4,5-5kwh/day including home office work for several people and a small fridge, no electric heating nor for water nor far space. There is a freezer in the coldest room chosen for its electrical efficiency. A solar system is installed and compensates this consumption.

A cool cupboard takes up a wall of the kitchen, tubes inside the floor draw air from it and through the cupboard then out through a vent. It can also be done using a water tank as a cool mass.

The other drawers under the kitchen bench are arranged to be tighly closable and contain bulk foods. Sue buys bulk food for themselves and neighboors, saving costs and waste and stores wherever they made room for, mentioning the importance of a properly wide cellar She uses notably kamut a delicious ancient grain.

Impressed by the whole body of knowledge and skills you need to build a house, i ask how to gather such knowledge and skills to do it all by yourself. David explains that he is more of a wood worker than anything else and he asked his friend who knows plumbing to help, the rest is learnable and can be practiced without too much more experience. He says about himself « I'm more of an ecological builder than an ecological farmer but you need food more than housing nowadays. » 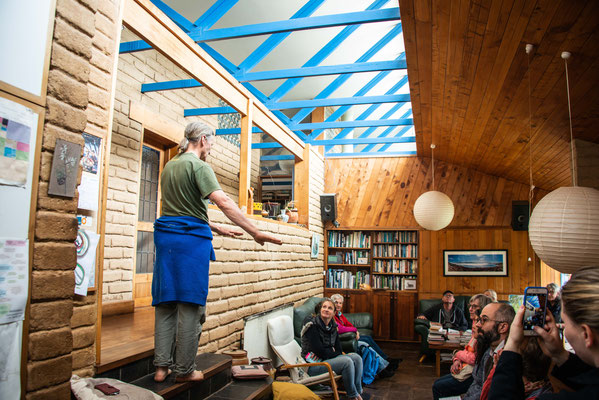 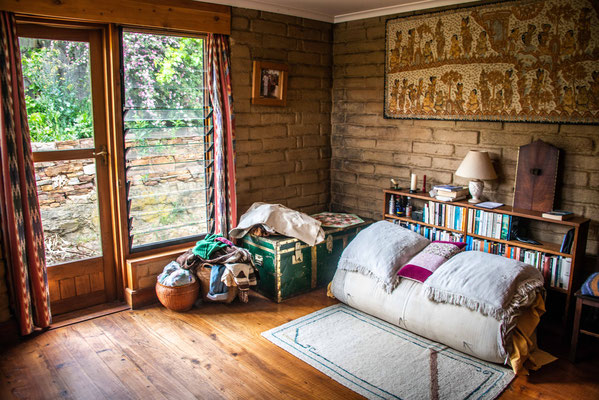 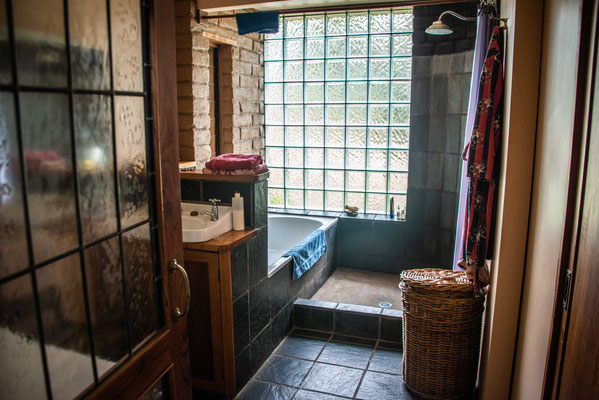 Still we move on outside to the garden. The orchard was planted there between 1989 and 1990. As the land is 500m above sea level and 100km from the coast, it is subject to frost. However, thanks to the house creating a sheltered space and being a thermal mass and with trees and hedges, a microclimate is created close to the house where the more fragile plants such as fejoas are planted. Overall the land produces about 2,5T of fruits a year and enough vegetables so that there is no need to buy some. Food self-sufficiency, and self-sufficiency in general, is also about « aligning what you eat with what you have ». David warns about the « just-in-time vulnerability » of the current global food system and stresses the importance to consume local food and thereby to support local farmers. Technically the beds are organised along a regular rotation across the garden. Some beds have more a market gardener style and others are left to thrive for more biodiversity and left to go to seed. There are various mixed approaches used in the garden. Diversity makes the resilience of a system. One can find everywhere comfrey and borage as these are very useful plants, both for mulching and to support pollinators. A comfrey poultice can even be used to mend bones and bruises, it is one of the only source of vitamine B12. Asparagus and artichokes are planted close to deciduous trees because they grow in winter when the trees will have lost their leaves and can be sheltered by the trees during the hot summertime. There are goats and chickens and ducks around as well. There is a compost heap outside made up of green and brown material from the garden. There is another compost heap in the chicken coop for kitchen waste. Overall, it is an integrated system where humans, animals, vegetables and fruit trees interact around the solar, water and soil ressources.